Background: Low power factor is regarded as one of the most dedicated issues in large scale inductive power networks, because of the lost energy in term of a reactive power. Accordingly, installing capacitors in the network improves the power factor and hence decreases the reactive power.

Methods: This paper presents an approach to maximize the saving in terms of financial costs, energy resources, environmental protection, and also enhance the power system efficiency. Moreover, the proposed technique tends to avoid the penalties imposed over the electricity bill (in the case of the power factor drops below the permissible limit), by applying a proposed method that consists of two stages. The first stage determines the optimal amount of compensating capacitors by using a suggested analytical method. The second stage employs a statistical approach to assess the reduction in energy losses resulting from the capacitors placement in each of the network nodes. Accordingly, the expected beneficiaries from improving the power factor are mainly large inductive networks such as large scale factories and industrial field. A numerical example is explained in useful detail to show the effectiveness and simplicity of the proposed approach and how it works.

Results: The proposed technique tends to minimize the energy losses resulted from the reactive power compensation, release the penalties imposed on electricity bills due to the low power factor. The numerical examples show that the saved cost resulted from improving the power factor, and energy loss reduction is around 10.94 % per month from the total electricity bill. 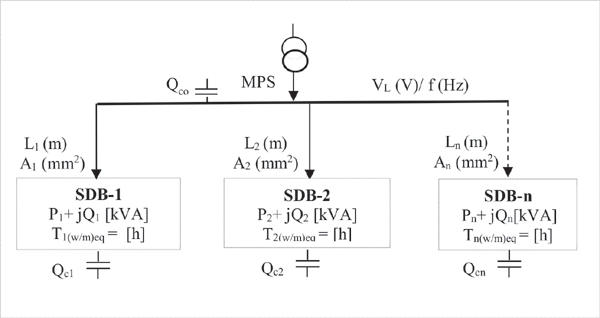