Background: Existing power systems normally operate at heavily loaded conditions and often face a surge in load demand. In spite of the implementation of the state of the art preventive measures, blackout prompted interruption in the energy supply is an enduring issue. Typically, the voltage collapse is evaded by severing a critically loaded line, which has severe repercussions including oscillatory transients and stability hindrances, which can eventually lead to a voltage collapse.

Methods: This work presents a viable solution for the on-line alleviation of voltage stability constrained transmission corridors to avoid the blackout without interrupting or severing any load line. The proposed method is implemented by the insertion of a resistive impedance in the most affected and critical line to damp out power oscillations and to avoid repetitive operation and cascaded effects leading to the system collapse.

Result: This work aims to develop a methodical transmission network analysis and to establish the effectiveness of the proposed augment scheme followed by a demonstration of the proposed methodology through the simulation results of the IEEE 24 bus test power system model.

Conclusion: Further, experimental verification is performed on hardware in the loop test bench with a 220 KV artificial transmission line to demonstrate the capability in practical systems, to address the challenge of voltage collapse and blackouts in smart power systems. 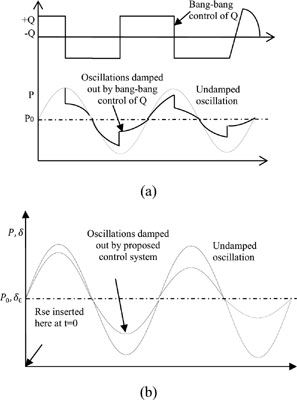